Our Yad Sarah volunteers were committed to keeping all services open with determination and grit – working non-stop to offer additional emergency support. During the days of the military operation called Operation Guardian of the Walls, Yad Sarah branches and centres operated under emergency protocols and continued to assist all applicants, lending medical equipment and assisting those patients recovering at home.

As the crisis in Israel quickly escalated, Yad Sarah’s executive team moved quickly to transfer emergency supplies by the hundreds to branches in the south where aid was needed most.

The emergency call centre also worked under alternate conditions, with some of the volunteers working from within the bomb-protected centre, which allowed them to continue to provide service even when sirens were sounding in our towns and cities. Representatives contacted seniors from the southern region to make sure they were safe.

In one case, it turned out that an 85-year-old woman was left alone in her home helpless without a protected space in her home due to a malfunction. Yad Sarah arranged for someone to go to the house to fix the problem for free.

More than 700,000 seniors over the age of 70 were under the threat of rocket fire in the last round.

Despite roadblocks and rockets, volunteers at our branches continued to provide service, sometimes at great personal risk.

The volunteers worked with great dedication while sirens wailed and rockets fell. We were able to supply equipment to the branches throughout, making sure there were no shortages. I noticed that there was a great demand for walkers, for people who did not use them normally but were now borrowing them to deal with the alarms. The only branch that did not open was in Sderot, due to the fact that there is no protected space. Even now it is difficult for volunteers to return to the Sderot branch. People are afraid that there will be alarms even now after the ceasefire and are afraid to come to a branch that has no protection at all.

We had to travel by taxi to the branch at Assuta Medical Center, for fear of traveling on public transportation or by walking during the alarms. On one of the first days of the fighting, I arrived with other volunteers on the way to the branch when at the main junction an alarm suddenly sounded, and we had nowhere to run or escape; all we could do was lie on the floor and wait for a miracle. We survived unscathed, but the trauma was real, and after that experience, we all made the trip in taxis. We made sure to operate the branch every day; only one day we were forced to leave a few minutes early because of expected alarms.

There was increased demand for accessories due to orthopedic injuries sustained as a result of dashing to the protected spaces.

Many people reported they had suffered injuries during the alarms. We hosted three families at my house because they did not have protected spaces at home. Other volunteers hosted families, as well. 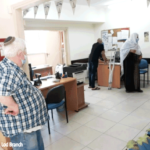 In Yad Sarah’s Lod branch, Jewish and Arab volunteers proved a model of coexistence, even as tensions were high throughout the city. Trying times like these remind us that no obstacle can stop Yad Sarah from bringing help and care to the people of Israel.

The branch continued to operate during the days of emergency with the help of volunteers who worked while alarms sounded and rockets rained down. People came to borrow first aid equipment of all kinds and received a full range of services at the branch. Except for two particularly difficult days, when residents were required to stay inside the protected spaces at all times, the branch was open. The branch in Ashkelon is located inside a shelter, so it was used by the residents of the area who live in homes without their own protected space. The volunteers purchased toys for the children of the families who used the shelter. Among those staying at the shelter was an elderly and disabled woman, who came with her caregiver.

It is interesting to note that the accessories that were most in demand were bath/toilet chairs. The demand for them was much more than normal and very unusual.

All the volunteers came to work throughout the days of rocket fire despite the need to leave their families and despite the fear of alarms on the way. This includes volunteers who came from places like Rahat, Meitar, and Lehavim, and despite the riots that were taking place on the roads.

We worked every day from nine in the morning until six in the evening. People came to pick up equipment despite the tension and fear. What was unusual was that during the fighting, customers did not come during the evening hours as they usually do. On the last day of the fighting, there were rockets that landed not far from the branch, but our work continued as usual. Throughout, we made sure that equipment of all kinds was readily available, and we supplied equipment as needed to all Yad Sarah branches in the southern region.

Other Articles that may Interest You: